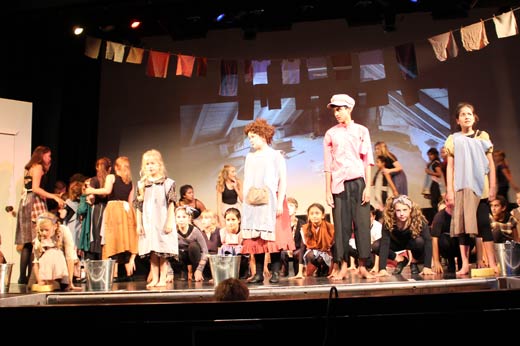 In April 2017, our World Record Achievement was featured in an online article by WhatsOnStage.com about 10 of the best Theatrical World Records.

We began this academic year on a high after successfully breaking the official Guinness World Records title for the Fastest Theatrical Production, with our performance of ANNIE. The challenge involved staging a full show of at least 90 minutes in length from start to finish.

After the name of the show was revealed at 6am, the Sharpe cast and crew set about production meetings, auditions and casting, costume and set design, props, direction, choreography, musical direction, putting together a live band, lighting and sound design, all in the presence of an adjudicator from Guinness World Records.

Upon completion of the rehearsal process, the doors were opened to the public for the performance. At the end of the show, the full company was delighted to be presented with a certificate stating they had successfully set a new GUINNESS WORLD RECORDS achievement of 15 hours for the Fastest Theatrical Production.